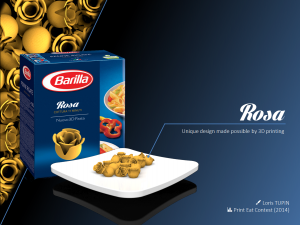 Hey guys, today were here to announce you, officially the 3 design projects which have been selected as winners of PrintEat!, the first 3D modeling competition aimed at creating new shapes of pasta using 3D printing technologies!  As you all know the creative contest has been commissioned to Thingarage by Barilla, the world’s leading pasta brand, and has been opened for two months to all modelers, 3D designers and architects who subscribed to the platform.

Goal of PrintEat was to revolutionize the concept of pasta, at least in the appearance in which we used to know. The designers hve been invited to join a creative effort to subvert the traditional patterns of production (extrusion and mold) by producing morphologies that can be accomplished only through 3D printing.

More than 530 international product designers from more than 20 countries have accepted the challenge, producing over 216 design concepts that have been submitted to a team of experts in charge of assessing the originality of the products. Countries with the highest number of active contestants were: Italy, United States, Netherlands, France and Germany.

He uploaded a bio-dynamic 3D model, that starting from a bloom turns into a rose when you put it into boiling water; Vortipa by Danilo Spiga and Luis Fraguarda, a product design team based in Cagliari, Italy.

They submitted a new concept of pasta based on the vortex pattern progression system that resembles a funny christmas tree;

He uploaded a full moon with craters created to improve the interaction between pasta and sauces.

For these modelers, thingarage allocated three cash awards totaling €2,400, plus the opportunity for designers to be interviewed directly on the blog site.

“We were thrilled to see the enthusiasm with which the contest was greeted by the designer community, which is not used to dealing with food,” said Michela Petronio, Research Vice President at the Barilla Group. “There are several steps that must be taken on the 3D project but whatever the future of pasta, Barilla is going to be there.” Making a product with the most advanced techniques of digital fabrication and 3D printing said Antonello Balestrieri, CEO of Thingarage means to overcome the limitations of industrial production in a smart way. I am extremely glad for the results of this competition: our design community interpreted this ambitious challenge in the best way, creating innovative products that paved the way for a new type of sustainable production and consumption. I believe that “PrintEat” effort showed us the limitless potential of crowdsourcing and that the field of Food Design is the one that can benefit the most from this process”.

Keep following thingarage blog to stay updated on the latest news on crowdsourcing and 3D printing! And join our contests to become the most popular designer of the community! Keep in touch!